NATURE BASED SOLUTIONS
FOR CLIMATE RECOVERY

"Nature Based Solutions can provide at least a third of the solution to climate change but receive less than 3% of funding from current climate finance."

Natural Sequence Farming (NSF), formerly called 'Natural Farming Sequence' is a 'Whole of Landscape' restoration and management approach that is based on Peter Andrews' observations how the old Australian landscape, prior to human interference, functioned. The basis of NSF is the science that is in the Australian landscape ('The Australian Landscape Science' or 'TALS').

NSF seeks to reinstate the functions of the old Australian landscape when the landscape was so lush that it supported megafauna.

NSF serves as a landscape restoration method as well as a farming method. The latter has been described as 'Stepped Diffusion System of Broad Acre Hydroponics' by Prof Haikai Tane.

Peter Andrews OAM has transformed many properties across Australia.

'Tarwyn Park' was Peter Andrews' 'living laboratory' in the beautiful Bylong Valley - until it was taken over by the Korean coal mine Kepco. (Their mining proposal has been rejected. A judgment on a judicial review sought by Kepco on this decision is pending.)

Find out more, below, as well as on the 'Case Studies' page of this website. 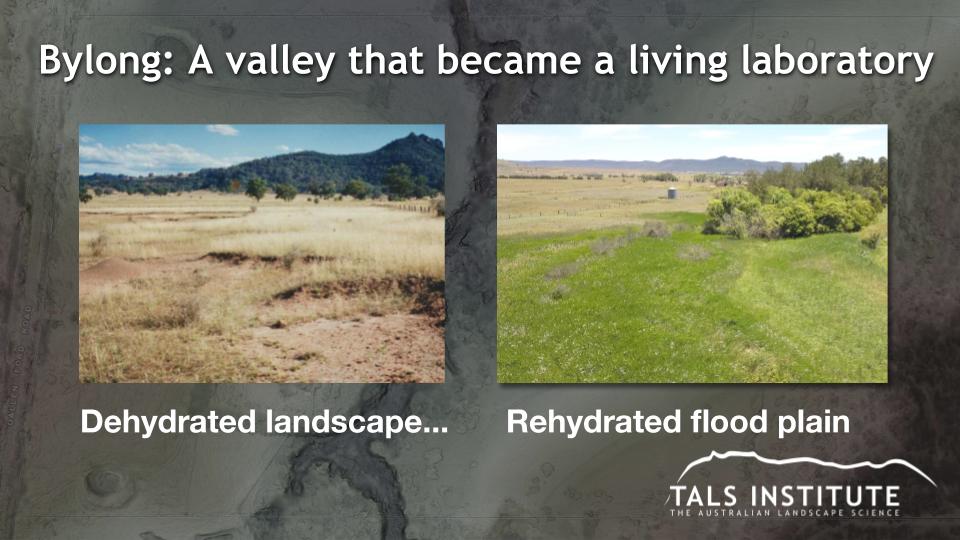 "The panel believes that NFS is a successful and sustainable farming system for the current enterprise at Tarwyn Park, where it has led to substantial agronomic and environmental improvements on the property.

"Central to the implementation of NFS at Tarwyn Park is the manipulation of the hydrologic regime, that has increased aquifer water storage providing effective sub-surface pasture irrigation.

It is important to note that some of the observations made in the 2020 Report are outdated, specifically those re relatively low biodiversity on Tarwyn Park and benefits to Tarwyn Park from upstream properties not engaged in NSF. Since its publication in 2002, Tarwyn Park's ecosystem of mainly early succession plants has naturally evolved to include high biodiversity. In addition, we have evidence of other properties (such as Baramul in the Widden Valley) that clearly shows that automatic soil creation is achieved without badly managed neighbouring properties exporting their soils to a NSF managed property. At Baramul, sandstone cliffs and first succession plants, together with NSF implementations, are the cause of increased water holding capacity, nutrients and biomass in soil, not a neighbour's soil and water.

See the comments by Prof David Goldney, landscape ecologist, below, that support this. ​ 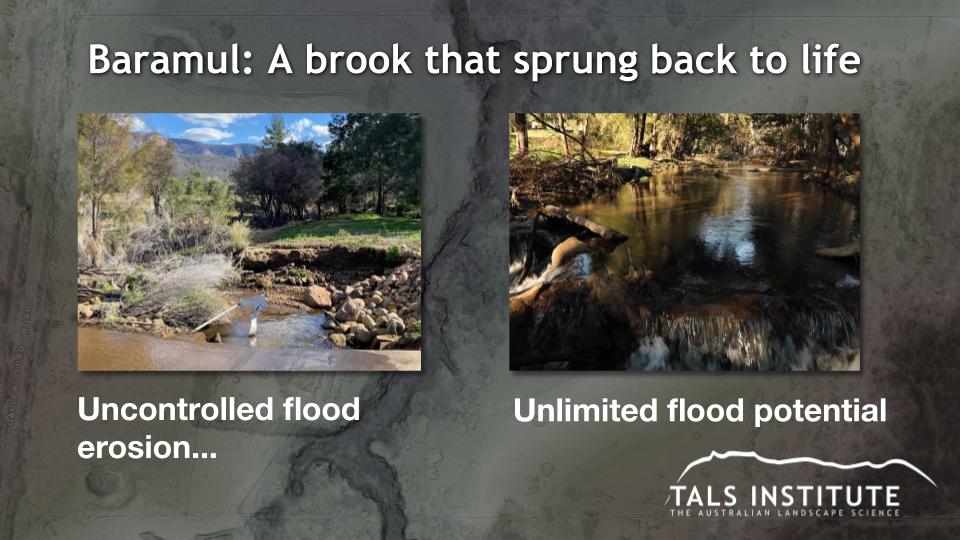 “Here [at Baramul Stud], in 18 months, you are seeing soil made on top of sand by a very simple process, and the organic layer is quite significant - that black layer that starts to form.

"I think it’s the most significant contribution to landscape restoration that I’ve seen in Australia. ...

“It all comes together in this very simple process that he has invented in a sense what was always there in the Australian landscape.

"I think Peter is a near genius. He’s a simple farmer who’s understood science better than most scientists, if not all scientists, and they come somewhat grudgingly to learn at his feet.” 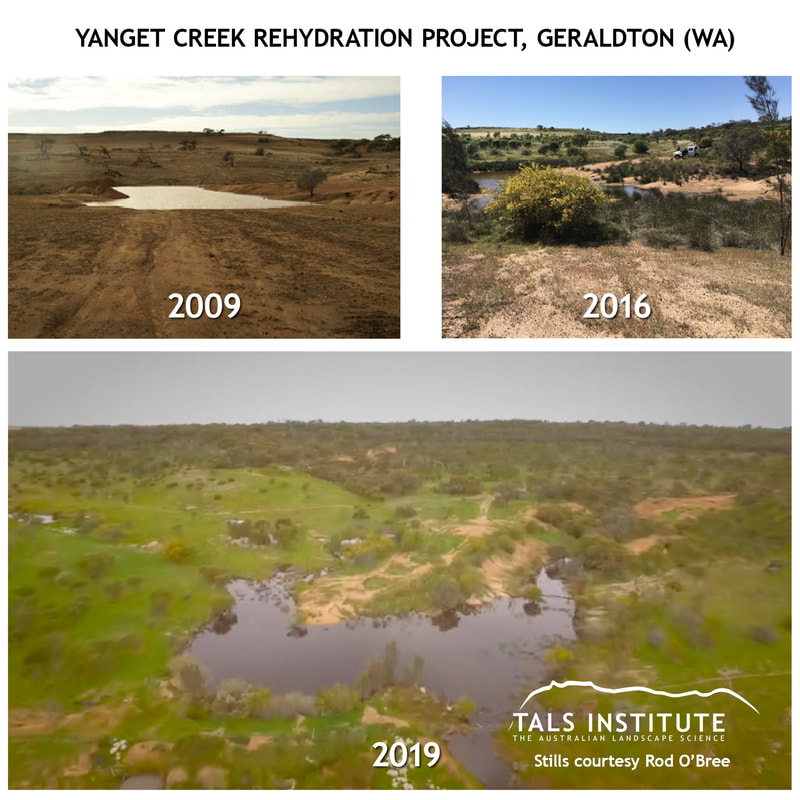 Read the scientific report on the page 'CASE STUDIES'.

NATURAL SEQUENCE FARMING AS A BASIS

"By one estimate, restoring 350 million hectares of degraded and deforested lands around the world would create up to $9 trillion in net benefits.”
​~ Verdone (2015). 'A Cost-Benefit Framework for Analyzing Forest Landscape Restoration Decisions'

"Here we argue that as the force of humanity increases on the planet, ecosystem service valuation will need to switch from choosing among resources to valuing the avoidance of catastrophic ecosystem change."​
~ Limburger, O'Neill, Costanza, Farber (2002) 'Complex systems and valuation'

Biodiversity and Ecosystem Services - A business case for re/insurance, 2020, Swiss Re Institute

It is estimated that "global ecosystem services provide annual benefits in the range of USD 125–140 trillion in 2011".

'The Business Case - Why is safeguarding biodiversity and ecosystems important for business?' IUCN website

​"3.3.1. Direct market valuation
​This is the exchange value that ecosystem services have in trade, mainly applicable to the ‘goods’ (i.e. production functions) but also some information functions (e.g. recreation) and regulation functions: New York City, for example, has sought to use natural water regulation services of largely undeveloped watersheds, through purchase or easements, to deliver safe water and avoided a $6 billion water filtration plant. This implies those watersheds are worth up to $6 billion to New York City. Wetlands trading programs allow property owners to capitalize on the demand for wetlands banks, with wetlands being sold in banks for $74,100–$493,800 per ha (Powicki, 1998).

3.3.2. Indirect market valuation
When there are no explicit markets for services, we must resort to more indirect means of assessing values. A variety of valuation techniques can be used to establish the (revealed) Willingness To Pay (WTP) or Willingness To Accept compensation (WTA) for the availability or loss of these services...."

"Here we argue that as the force of humanity increases on the planet, ecosystem service valuation will need to switch from choosing among resources to valuing the avoidance of catastrophic ecosystem change."